Small businesses form the heart of our local economy, especially in this part of Cornwall where we have only a few large employers.

If you are, like me, a small business owner, how are you promoting your business?  Are you aware of the website that gives you promotional material – find it here https://smallbusinesssaturdayuk.com.  Social media is also being used extensively to promote local businesses.

How are you as a customer supporting local businesses?  On Saturday could you use a local retailer rather than the big national chains?

The idea for Small Business Saturday came from American Express in the US in 2010 and is a reaction to the excesses of Black Friday and Cyber Monday, this year on 28th November and 1st December respectively.  So it is a new idea that grows every year.

Lets all work together to make sure we support our local small businesses as much as we can and maybe use this Small Business Saturday to consider what more we may be able to do.

Why I have pledged to improve our roads

This week has been another busy week on the road to 7th May. We have received delivery of my latest newspaper, which our army of volunteers will be out distributing over the coming weeks.

As well as dodging the showers whilst out delivering, I have also had a number of meetings with local residents helping them with issues ranging from planning and benefits to highways.

Issues relating to our roads are one of the most common concerns raised by constituents with me.  As well as the frequent concerns about the state of our roads, the number of potholes and issues such as parking and speeding, it is clear that many local people are also concerned at a more strategic level about the effect of the huge growth in traffic on the roads. A recent report highlighted that we also have the two most dangerous roads in Cornwall here in St Austell and Newquay. Yet there has been woefully little investment to improve the situation.

As I travel around the area I often hear how concerned you are about the congestion on the roads.  There was a time that the roads of Cornwall were quiet in the off-season; we all know this is no longer the case.  The roads are busy throughout the year; the number of people living in the county has grown and this has added to the burden on the infrastructure.

The Road Safety Foundation recently issued their annual report that highlighted the only two roads in Cornwall to receive “medium to high risk” status.  These are the A3058 between St Austell and Summercourt, and Par Moor Road, and both lie within the boundaries of our Constituency.

Our current MP warned us to be careful in the festive season and urged Cornwall Council to take note of the Road Safety Foundation’s findings.  But I am afraid this simply isn’t good enough, we need action.

It is clear that a large investment is needed to allow the quality of Cornwall’s roads to catch up with the increased traffic, especially here in mid-Cornwall. I have already been lobbying on your behalf, highlighting the issue to David Cameron, George Osborne and Patrick McLoughlin, the Secretary of State for Transport.

The following projects are already receiving my full support:

The Newquay Strategic Route – this is a key building block in the plan for the Newquay Growth Area and the airport, but it has stalled in recent months.
A new road linking St Austell to the A30 that also provides a by-pass for Bugle and Roche.
A new by-pass for St Austell, probably to the north, to ease congestion on the A390 from Holmbush to St Mewan.
Appropriate remedial work to ensure the A3058 and Par Moor Road are made safer.

The good news is that I am not on my own in this. The next Conservative Government will back these aims with hard cash.

“The biggest, boldest and most far reaching road improvement programme in four decades: over 100 improvements to our major roads. And all underpinned by over £15bn worth of investment. This will be nothing less than a roads revolution – one which will lead to quicker journey times, more jobs, and businesses boosted right across the country.”

So if we form the next Government there will be funds available and I will be pressing the case for investment in mid-Cornwall.

Speaking at the Conservative Party Conference last month, Patrick McLoughlin laid out his vision for rebuilding Britain’s transport system and highlighted the team already in place in the South West fighting on your behalf.

“Our great team in the southwest. People like George Eustice M and Sarah Newton MP backing Cornwall with better transport links for both locals and tourists.”

I would be honoured to join that team of people delivering better roads to this Constituency, but I can only do this if I am elected and so I ask for your support next May.

I would be happy to discuss this issue, or indeed any other, with you so please do not hesitate to get in touch.

Once the dust had settled from the great result in the Mevagissey by election, I was back out on the campaign trail.  With only 25 weeks to go until the General Election everything is focused back on 7th May.

The highlights of my week were:

Anne and I took the day on Sunday to pause the campaign and attend the Remembrance parades in Newquay and St Austell.  It was an honour to be able to actively participate in both of these events and to join the strong turnouts in both towns.  As usual the parades and services were extremely well run and the organisers should feel justly proud of their success.  As we travelled between the two services we took up the invitation to join the Remembrance Day lunch in St Dennis and we were made to feel very welcome. 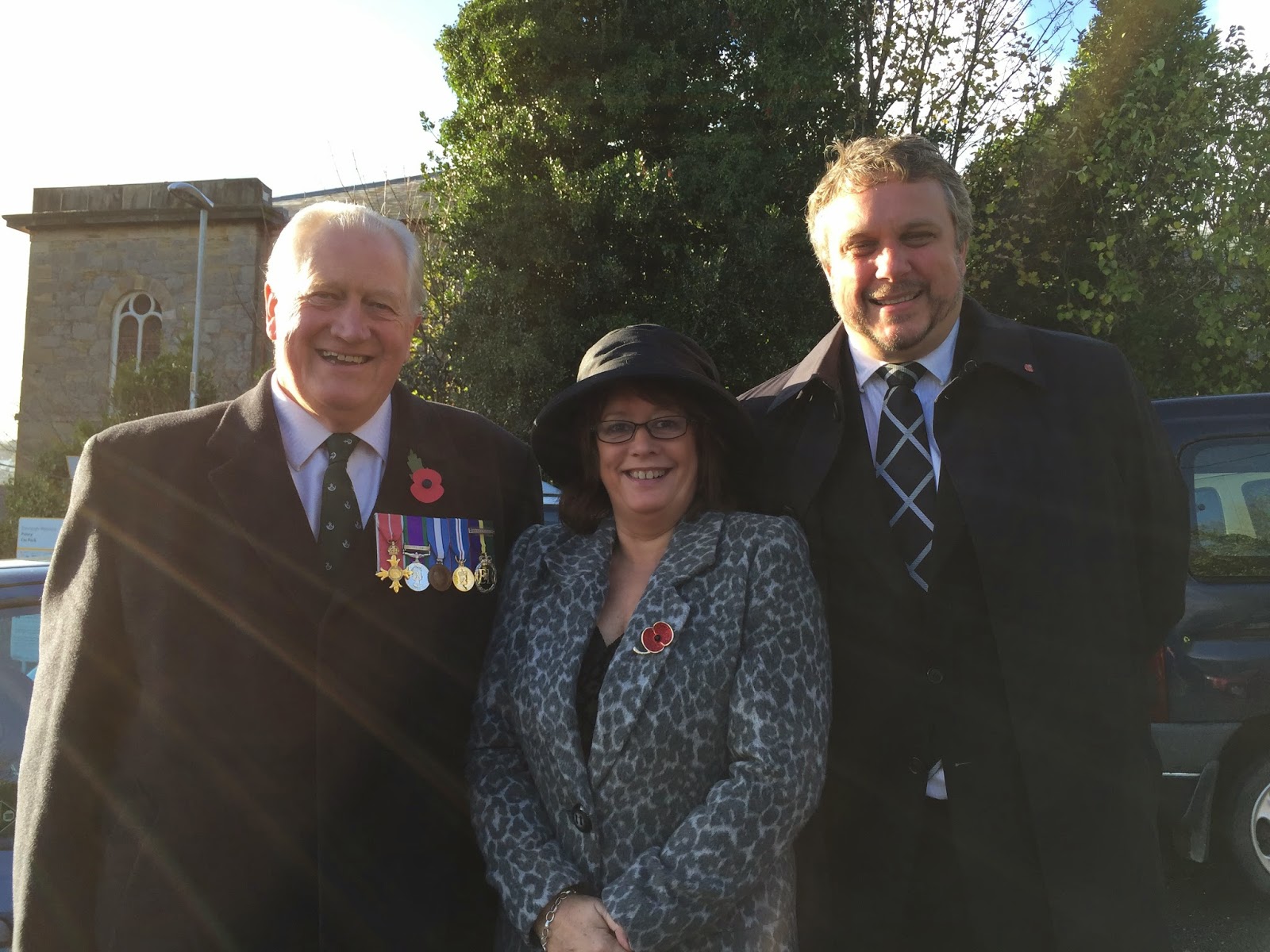 On Monday I discussed politics with the student council and history students at Treviglas School in Newquay.  It is always good to see the younger people engaging with today’s issues.

On Friday afternoon I was honoured to attend the signing of the Charter for Compassion at the Eden Project.   The Charter for Compassion is a global initiative and is;  “a cooperative effort to restore not only compassionate thinking but, more importantly, compassionate action to the center of religious, moral and political life. Compassion is the principled determination to put ourselves in the shoes of the other, and lies at the heart of all religious and ethical systems.”

The campaign team met in the week and I am pleased to report that our band of enthusiastic volunteers continues to grow.  But we have room for many more so if you are keen to get involved then please contact me and we can discuss how you can help.

This week has seen storms hit the county once again, so stay safe and warm.  If there are any particular issues that you think I could help with then please do not hesitate to contact me.

What a great week for the Conservative Party in mid-Cornwall.

I have spent most of the week in Mevagissey, as Thursday was the by-election for the Cornwall Council seat, left vacant in August following the resignation of Michael Bunney, the Labour councillor.

Although I disagreed with Michael’s politics, he was a very good local councillor and someone I have a lot of respect for as a person. When Michael won the election in May last year it was pretty clear this was largely a personal vote, rather than a resounding vote for the Labour Party. 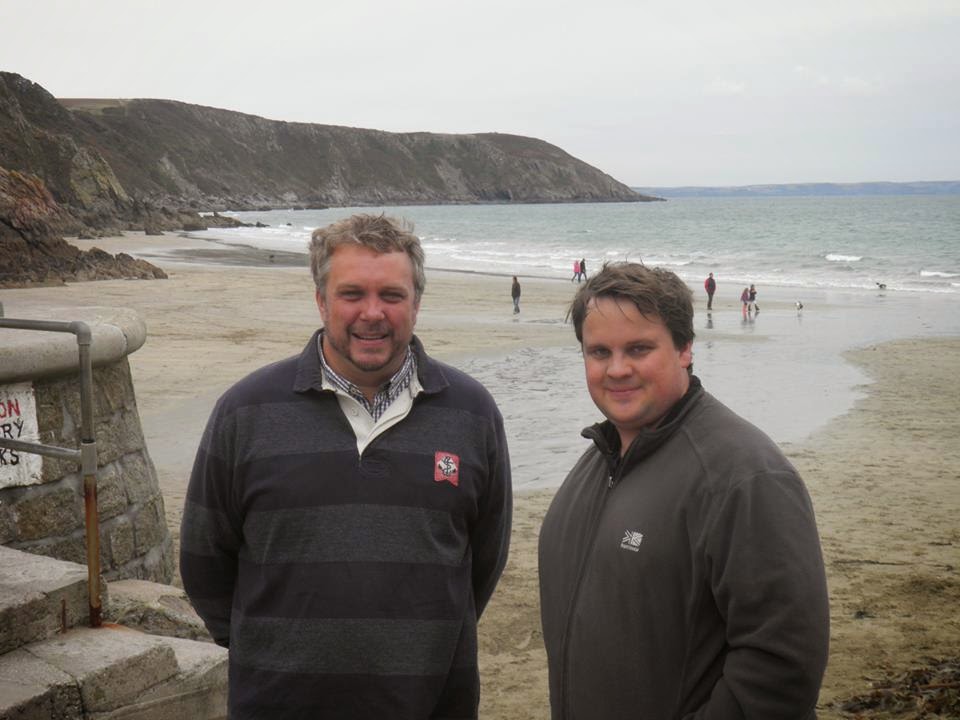 With James in Gorran Haven

The challenge for the Conservative Party was to work hard to secure that personal vote, a factor that is always important in local elections, especially in this part of Cornwall.

In 2013 we came 3rd, after UKIP, and this is an area that UKIP would expect to do well in.  With all of these factors in play, our selection of a strong local candidate was critical and so we selected James Mustoe, the 2013 candidate, again.

James is a local Mevagissey man who grew up in the village and has strong local connections.  He was an obvious candidate to champion the concerns of the people of Mevagissey ward and it was a pleasure to campaign alongside him.

I am therefore delighted to confirm that James won the by-election and is the new Cornwall Councillor for the Mevagissey Division.

James and I are very grateful to everyone who voted Conservative on Thursday.

Local by elections are often difficult to predict with low turnouts so this was also an important test of our campaigning team as we build up to May next year.

The result is a testament to James and the team supporting him, not only did we come from 3rd to win the seat, leapfrogging UKIP, we also saw the UKIP share of the vote drop. I am also sure the Lib Dems will be very disappointed to be kept in 4th place behind Labour.

This result shows that we are well on track towards being in a position to win this seat in May next year and see me elected as the MP for St Austell and Newquay.

I also want to say a big thank you to everyone who helped with the campaign. We had a small army of people delivering leaflets, knocking on doors, making phone calls and putting up posters.  The weather was atrocious and we all got wet but the engagement from people in the ward kept us going.  Politics is always a team game and this week we showed we have the passion and commitment to win next year. 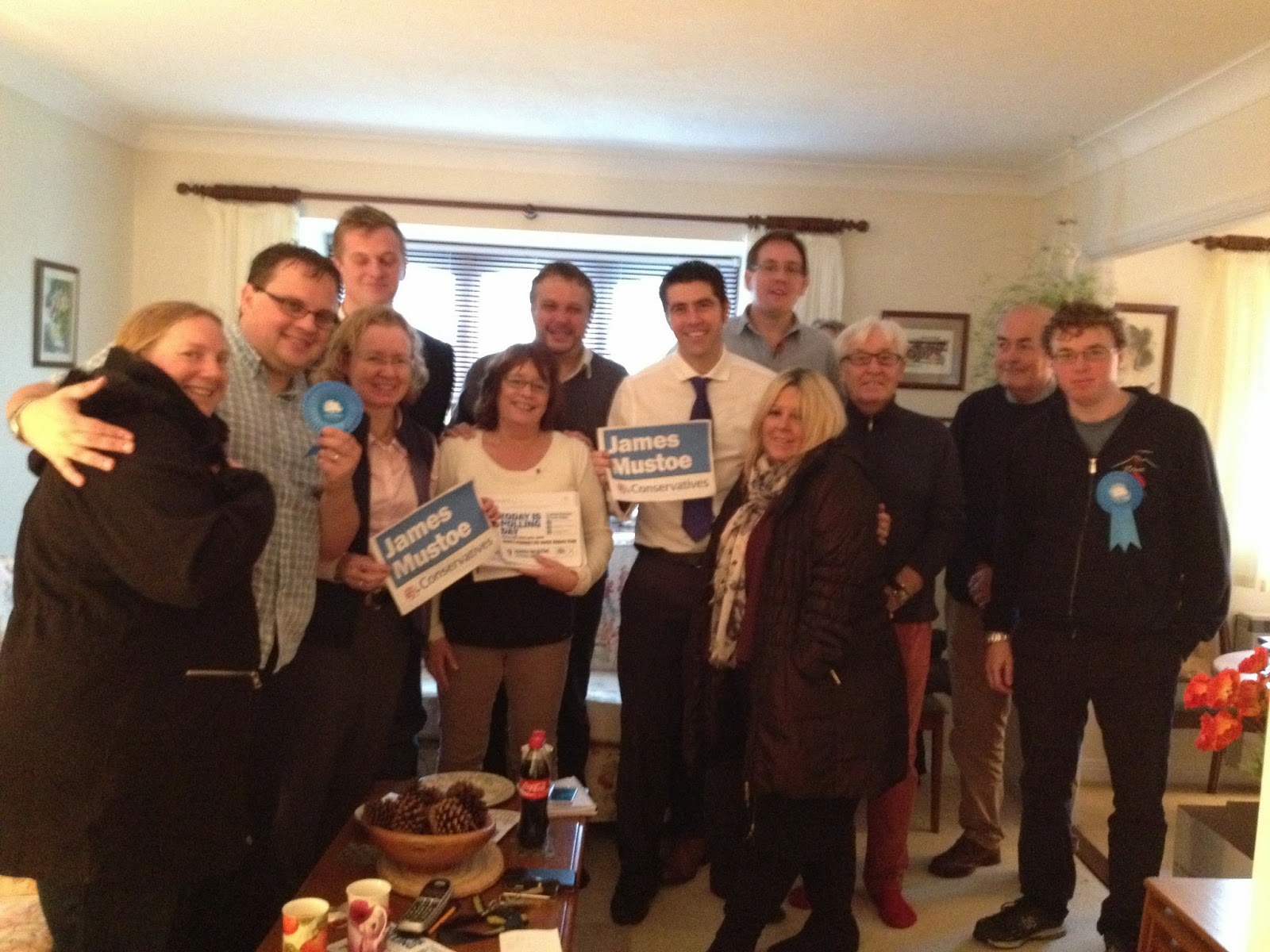 The focus now firmly shifts back to my campaign. It is now less than six months until the election. New people are coming forward to volunteer to help each week and if you would like to join our army of local people working with me then please do get in touch as we would value your active support.  Help us become the winning team in May.
at 03:31

If you want to get in touch, please call, email or write to the following: