The Brexit debate rumbles on. Last week I was pleased to be able to ask the Prime Minister, at the first PMQ’s after the conference recess, for an update on post-EU funding for Cornwall.

One of the key questions asked by people in Cornwall since the referendum has been whether the UK Government would be committed to support the Cornish economy following the ending of funding through the EU.

Despite several rounds of European Regional Development funding the Cornish economy still lags around 30% below the UK average. In my mind this points to the failure of the European funding that we have had in the past to really make any difference to the people and businesses that really need them.

The previous rounds of EU funding that we did get were meant to create 10,000 new jobs in Cornwall. In fact, in the past 10 years or so, it has helped created only around a third of that number. That Cornwall has now qualified for a third round of EU economic aid demonstrates that the funding is failing. It is not lifting the Cornish economy as it was supposed to do and has not raised wages or the standard of living in the way it was designed to.

There are some very practical reasons for that failure. We are not able to spend the funding on what we need to in Cornwall. How we should spend it has been dictated, Big Brother fashion, by the EU. The EU funding we had was designed for a Europe-wide programme that does not fit the Cornish economy and often applicants were forced to fit proverbial round pegs into square holes in order to try to access the money.

As an example, what Cornwall really needs in larger businesses moving into our Duchy that will bring significant investment and job creation. However the current round of funding through the EU excludes larger businesses – the very thing we actually need.

Throughout the referendum campaign I argued that should we vote to leave the European Union, we would have the potential to replace European funding with our own regional economic programme that would be less bureaucratic, more effectively targeted and better value for money for the British taxpayer.

With this in mind I asked the Prime Minister whether she agreed with me that Brexit will allow the Government to bring in just such a programme, as well as whether she could provide an assurance that her government will continue to invest in the poorer parts of the country like Cornwall once we leave the EU.

In response the Prime Minister provided me with the reassurance that in line with her goal for an economy that works for everyone, for every part of our country including areas like Cornwall and the Isles of Scilly, she would be open to further discussions with Cornwall on ways in which the Government can improve the Cornish economy for the future.

I am pleased that the Prime Minister has been clear she will continue to work with us to ensure we deliver what Cornwall needs. I believe we have an opportunity to develop an economic programme that will be more effective than what we have had in the past through the EU. There are many other aspects of our Brexit negotiations to consider with them in the last week seemingly encompassing everything from immigration to the price of marmite. I will do all I can to make sure Cornwall gets the best deal for our future.

The sale of kittens

I totally agree that kittens and other pets should be sold in good condition and well looked after. Currently under the law it is a criminal offence to keep any animal in a poor condition or cause any unnecessary stress to animals. This includes not treating any diseases, underfeeding or inappropriate housing/environment.

The Government has produced a guide for buying a cat or dog. It gives advice on what to look for when buying a pet to make sure the illegal trade in animals isn’t being fuelled. You can look at it here:

The next time I meet with the Minister responsible, George Eustice, I will raise the point about kittens not being included in the review of legislation. 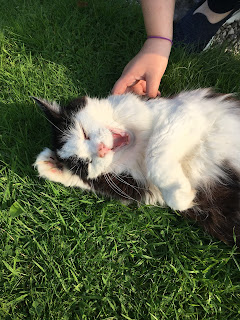 Last week was the Conservative Party conference and our new Prime Minister’s first real chance to lay out her vision for our country.

In her closing speech she presented a vision of a country that works for everyone and touched on a number of key issues and steps to achieving this.

It marked a shift in emphasis after six years where we have had to address the deep financial challenges the country was facing in 2010. Although there is clearly still work to be done in ensuring our country lives within its means, Theresa May clearly intendeds to look to the future and the type of country she wants to build. I welcome this.

The biggest issue facing us as a country is clearly implementing the decision by the British people to leave the EU. I was pleased that the Prime Minister sent a clear message that we will respect the democratically made decision and ignore those who are calling for it to be rerun, cast aside or fudged. We will be leaving the EU and we now have a timetable for when this decision will be implemented - in the first part of next year. This will be followed by a Great Repeal Bill that will legally pave the way for us to leave the EU and re-establish the sovereignty of the UK Parliament over all matters that are currently controlled by Brussels.

The PM also made clear that she understood that the referendum result was not just about leaving the EU. It was a deeper expression of people’s frustrations and anger at the disconnection people feel to the political systems, along with the desire for us as a country to take back control over our own affairs, especially in areas such as immigration.

This will be a lengthy process which will have any number of twists and bumps in the road. But I believe Theresa May has shown that she gets it and will deliver on Brexit.

Other highlights from the Prime Minister's speech include an announcement to continue to reform welfare and the changes to assessments for ESA as I wrote about last week, reform of corporate governance to ensure all businesses are run accountably and with long-term interest clearly in mind, strengthening workers’ rights, bold new education reforms – so that every child has the chance to go to a good, local school and that they are not held back by where they live or how much money their parents have and continuing to invest in our NHS – £10 billion extra over this Parliament, which is only possible because of the strong economic foundations we have built.

I am proud to be part of the Government that is working to achieve the Prime Minister’s vision and look forward to continuing to practically apply it for the good of Cornwall.

As always, my team and I are here to serve the whole constituency and work hard to make a real difference to the lives of everyone needing support. If there is an issue you would like my assistance on then please contact me on either 01726 829379 or office@stevedouble.org.uk. Additionally, I hold regular, appointment only, advice surgeries across the constituency. Dates of these can be found at: www.stevedouble.org.uk/events
at 01:45

This week the Conservative Party held our annual Conference, which today concludes in Birmingham. As usual there have been a number of announcements of new policies. There was one in particular that I was very pleased to hear.

As your Member of Parliament a great deal of my time is taken helping and supporting people who encounter issues with the systems for claiming benefits there are entitled to.

One of the issues that I most often encounter has been with constituents encountering delays and processing issues with their Employment and Support Allowance (ESA) claims.

ESA was brought in by the last Labour Government in 2008 as a replacement to Incapacity Benefit. It is the benefit that people claim when they need support as they are unable to work due to illness. When ESA was first brought in there were many problems with its operation, which the Coalition Government set to fixing, not least the lack of focus on mental health disorders. ESA in 2016 is much more fit for purpose than in 2008 but there is still more work to be done.

One particular issue that has concerned me since I have been an MP has been the requirement for ESA claimants to be re-assessed regularly even when their condition was clearly a long term illness or disability with little chance of improving. I was pleased then that last weekend the Work and Pensions Secretary announced that people claiming ESA who have chronic conditions, that are unlikely to get well, will no longer have to attend repeat assessments to determine whether they are still eligible to claim the benefit. That people did have to attend multiple assessments, when they had conditions that were never going to get better, and in fact often only get worse, did strike me as being counter-productive and something which hindered those who we should be trying to help. Since becoming MP I have lobbied DWP Ministers many times on this issue and am pleased to see that the Government has now listened and made the changes that were needed.

The challenge now is to ensure our benefits system remains there to not only help and provide for those people who are unable to return to work but also support those who are able to get back and find a job. I am a passionate believer that for the vast majority of people claiming benefit, we should be doing more for them than just paying them money to live. Providing a package of support, not just monetary, for those who are able to return to work is a much more positive way of helping those who need it. I will continue to work both in Cornwall and in Westminster to ensure the benefits system is one that is fair for all.

As always, my team and I are here to serve the whole constituency and work hard to make a real difference to the lives of everyone needing support. If there is an issue you would like my assistance on then please contact me on either 01726 829379 or office@stevedouble.org.uk. Additionally, I hold regular, appointment only, advice surgeries across the constituency. Dates of these can be found at: www.stevedouble.org.uk/events
at 03:18

If you want to get in touch, please call, email or write to the following: